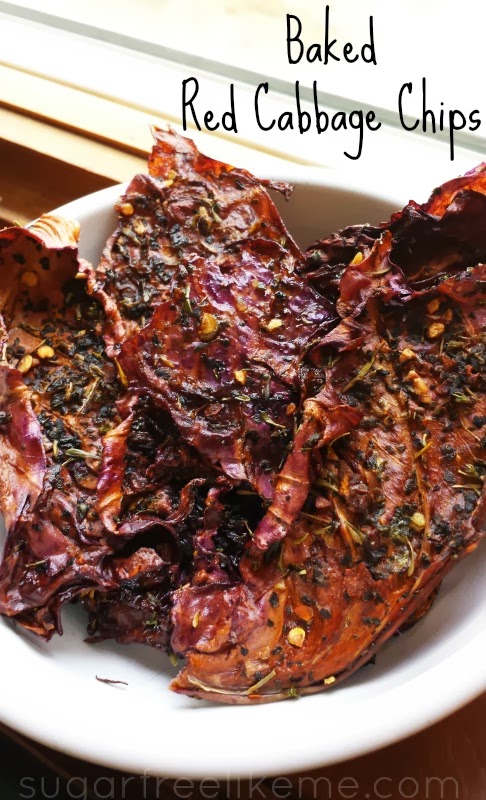 Out of curiosity I bought a red cabbage the other day instead of the typical green kind. It was just so..PRETTY and even though I could have just used it as I normally would a green cabbage, I wanted to use it in a new (to me) and different way. First, I used half of it to make a yummy red cabbage and green apple vanilla smoothie. Then using the other half, I wanted to see if they could be oven baked like kale to make chips. To my pleasant surprise, it worked! These Baked Red Cabbage Chips tasted amazing! Not "cabbagey" tasting at all. A few of them were really crispy and a few were more chewy. The crispy ones were my favorite but the slightly chewy ones were good too..almost like...Red Cabbage Jerky or something! Since I only had half a head of red cabbage, they shrank up quite a bit and I didn't have many chips in the end, so i'll be going back to the store for more soon since another bonus was that my 2 year old loved them as well.

1. "Peel" as many cabbage leaves as you'd like from the head.

2. Put the leaves in a bowl, add a few tablespoons of olive oil and
add any seasonings you'd like, Or even just use sea salt to flavor. Toss to coat. It's really your preference at this point. I used an amazing Spicy Lime Pepper Seasoning (red peppers, lime basil, garlic, and thyme).

4. Put your leaves on a cookie sheet and bake at 200 degrees for a *few hours (see note below picture) or until leaves are dry and crisp. Some leaves may be a bit flexible but should be dry when done cooking. I think it's just the thickness variance of the leaves that makes the outcome of the chip texture different in some leaves. You could probably keep these leaves in longer to crisp them up more. 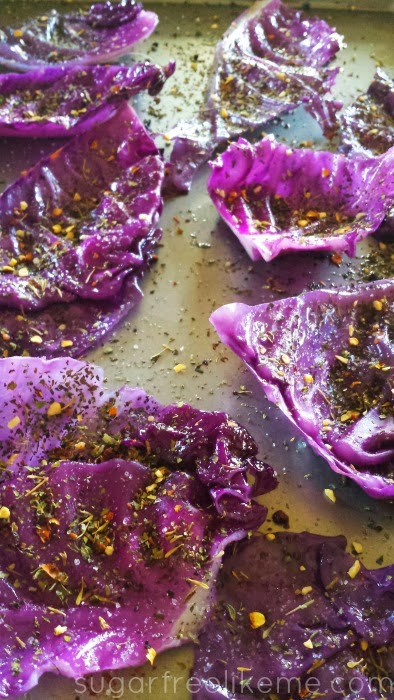 **Mine literally took like 6 hours to finally dry out and crisp up. You could try to up the temp to speed it up. I may try that next time, I just didn't want to burn them so I kept the oven temp low for my first time making them. It was worth the wait though, as they were a really delicious, low carb, and healthy snack!