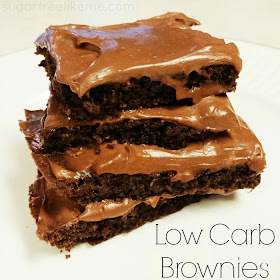 This was my first attempt at making low carb brownies. I was looking for a low carb brownie recipe that didn't contain some of the harder to find ingredients that lots of LC recipes call for such as erythritol or Brown Sugar Twin. My go-to low carb cookbook is 500 More Low Carb Recipes by Dana Carpender and that's where I found this simple but satisfying recipe originally submitted by Pam Robles.

2. Melt the chocolate and the butter together in a saucepan or microwave.

3. Use an electric mixer to beat in the your granular sweetener and then add in the eggs one at a time, beating well between each addition. Stir in the vanilla extract and then add the almond flour and salt. Stir in the nuts if using.

4. Pour brownie mixture into pan and bake 20-25 min. Let cool in pan and cut into squares

Yields about 16 squares at 2 net carbs per brownie if you use the recipes recommended almond meal.

Simply soften your cream cheese and add your own low carb ingredient preferences. I used a bit of melted 86% cacao dark chocolate, some sugar free hazelnut syrup, and 1 packet of granular Stevia (2 teaspoons). Mix well and spread it on. 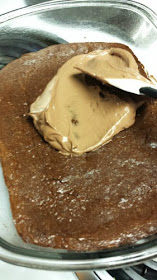 I ate mine while they were still very warm and the frosting still hadn't stiffened up. They were really good, but when warm, I thought the texture was more like chocolate cake (although I wasn't complaining, trust me!) 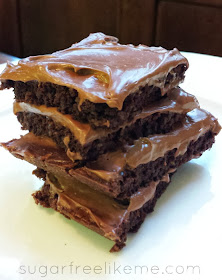 However, if you cover these and stick them in the fridge for awhile they taste wonderful cold, and definitely have a more brownie-like texture. It's weird...i've found that lots of low carb deserts taste better cold. Might just be me though. 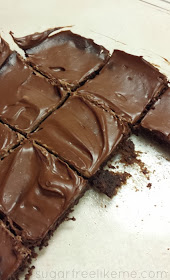